There may have been some members who flew at the turf farm yesterday, but the legend that was born at Mareeba yesterday afternoon will never die! (Much more on that later)!

CMAC members who went up to support MASCOTNQ were as follows:

Me, Anthony, Paul, James, Greg W, Michael (& Rachel) & Brendon who holds dual citizenship as a member of both clubs but, in what turned out to be a a clever decision, was wearing his CMAC shirt on the day.

Here's some photos of our tent city & aircraft. 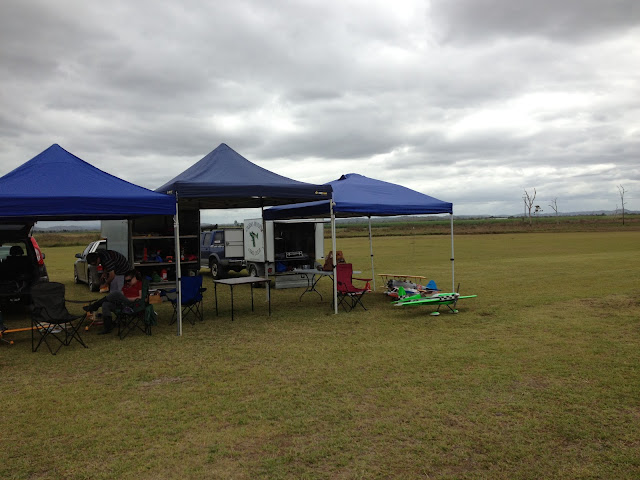 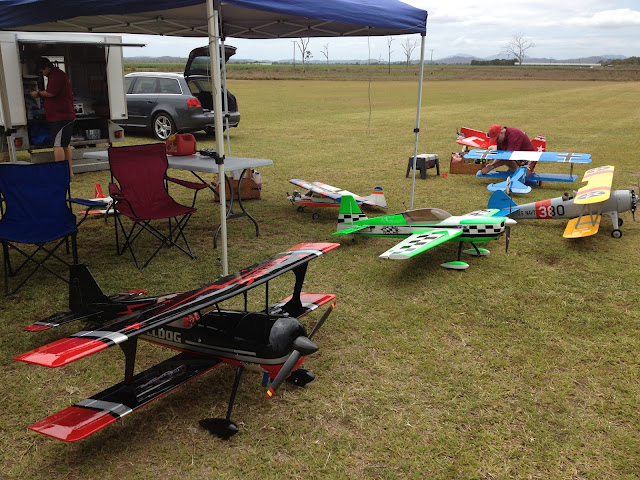 Alright, so on to the flying. Unfortunately it was a grey sky with a very strong crosswind that greeted us in Mareeba but it didn't stop Michael & Greg W from spending time sorting out Michael's new Hangar 9 Katana & she looked good! 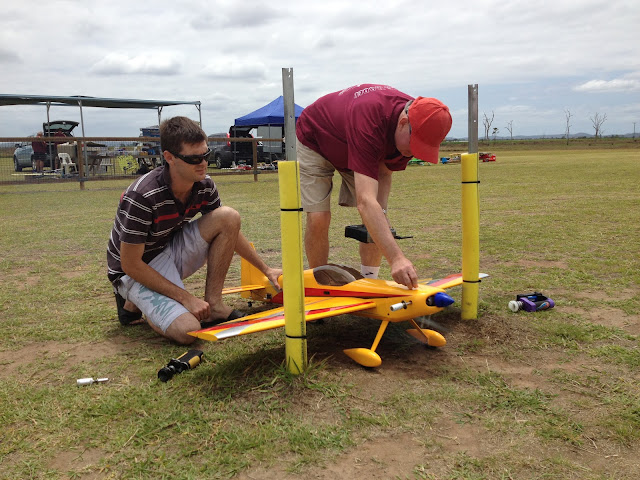 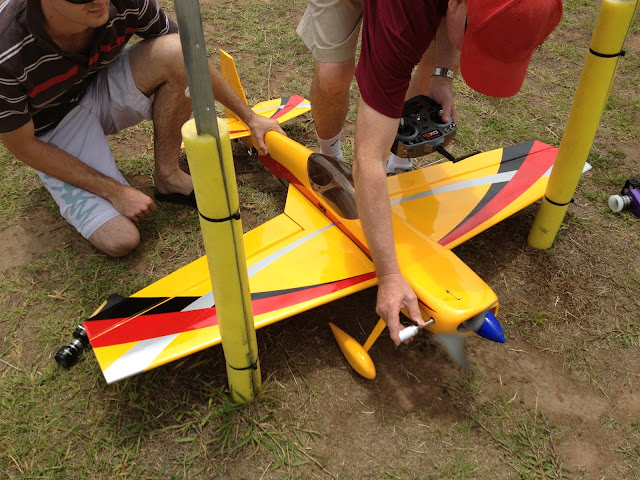 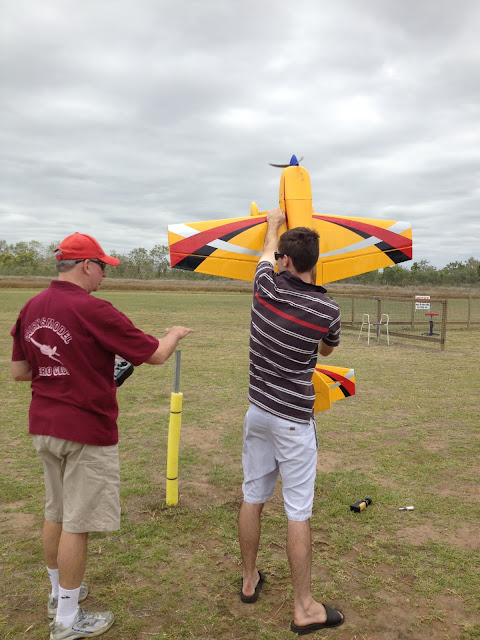 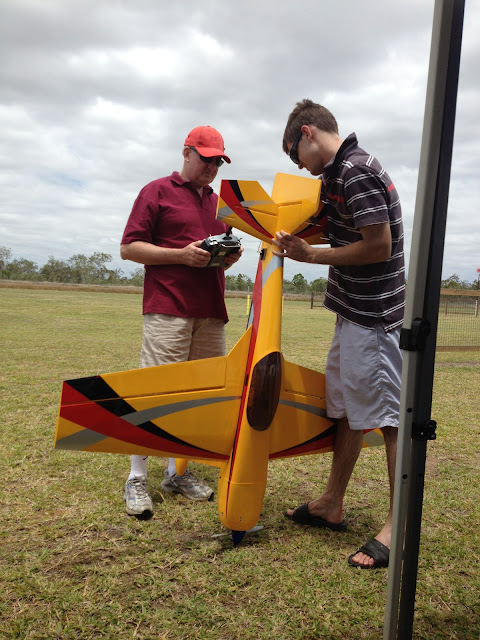 All this was soon forgotten however when the story unfolded which will forever be known as "The Legend of The Nutta F**cker"!

Mark & the MASCOTNQ guys decided to run a competition that pitted the skills of the three clubs that were in attendance against each other: Mareeba vs. Cairns vs. Townsville.

Each club was given a polystyrene fruit box that was filled with all the raw materials needed to construct an electric aircraft, we then had the rest of the afternoon to design & construct the craft prior to a fly-off to the death!

Here's the Cairns crew talking through some initial design concepts. 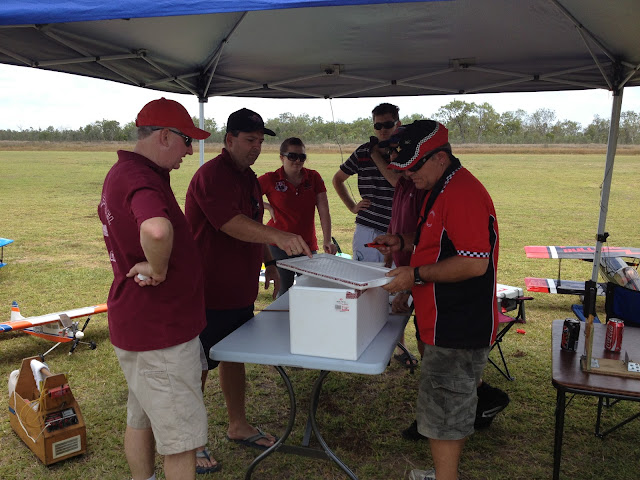 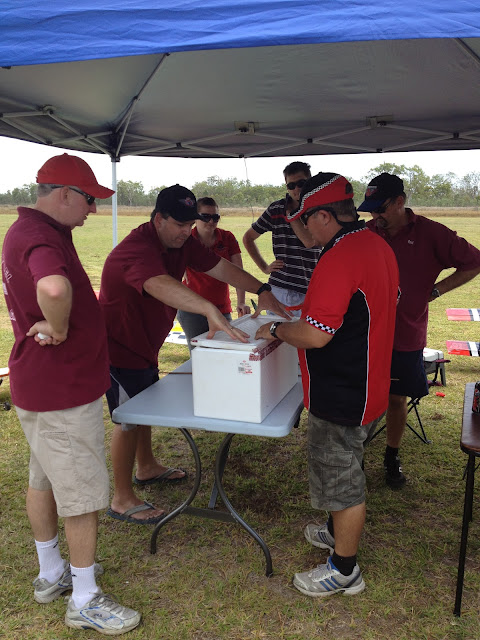 It was then left basically to James, Anthony & Paul to put words into action & to create the actual machine! 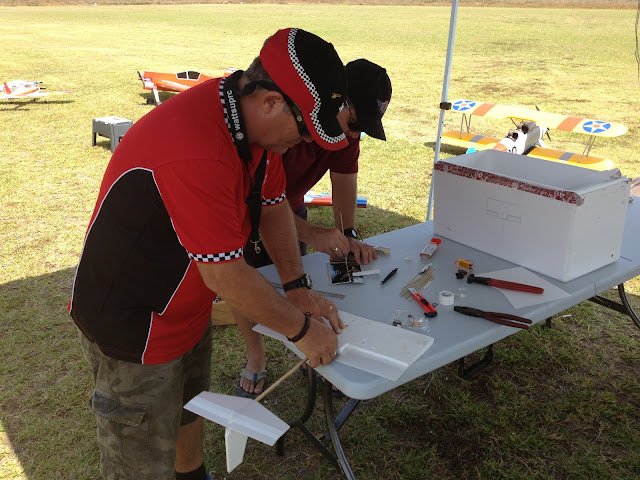 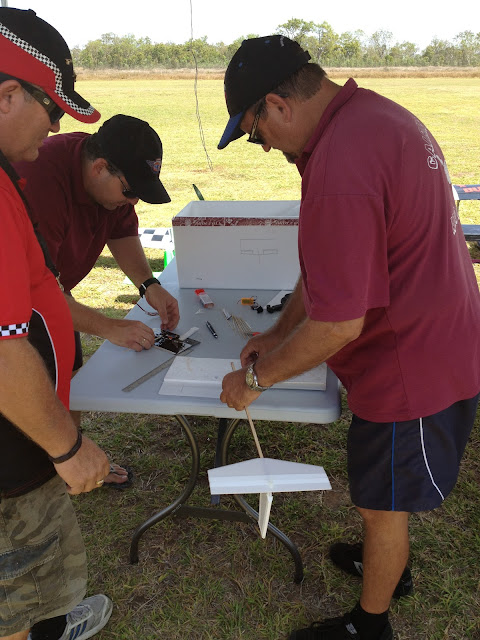 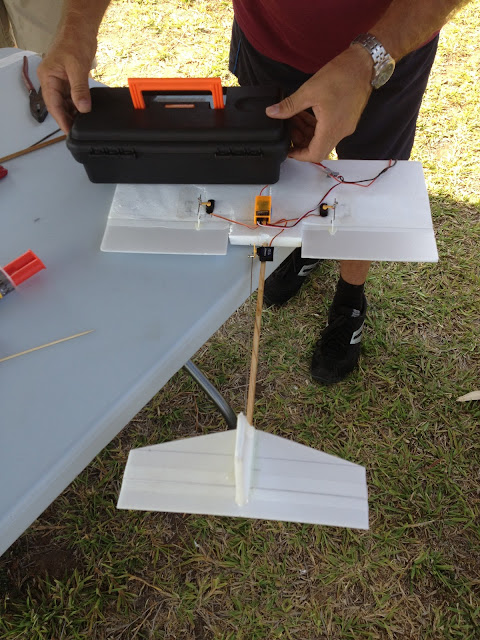 The completed aircraft priot to final markings being applied. 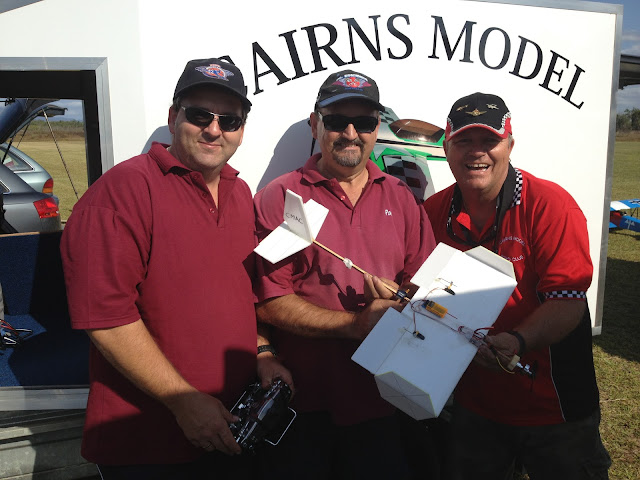 As always there was plenty of sledging that went on & the general consensus from the MASCOTNQ guys was that they had the winning design that was clearly based on a tried & tested club design known as the 'Nutta'; we were told that our design was a POS & that it would not fly.

Here's some interclub banter going down! 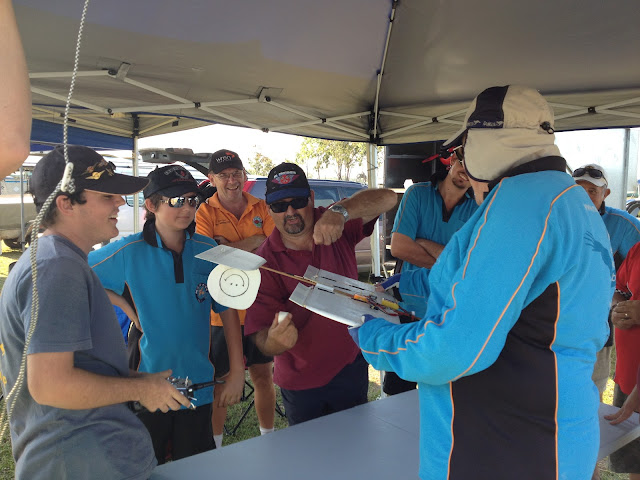 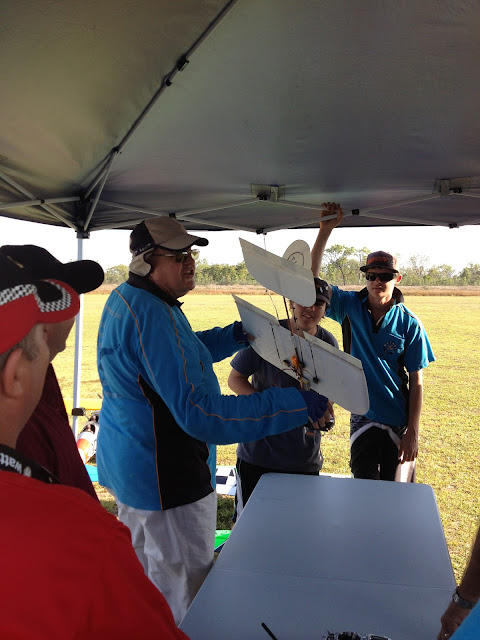 The final designs on display from the three clubs, note the CMAC entry with hand drawn flames! 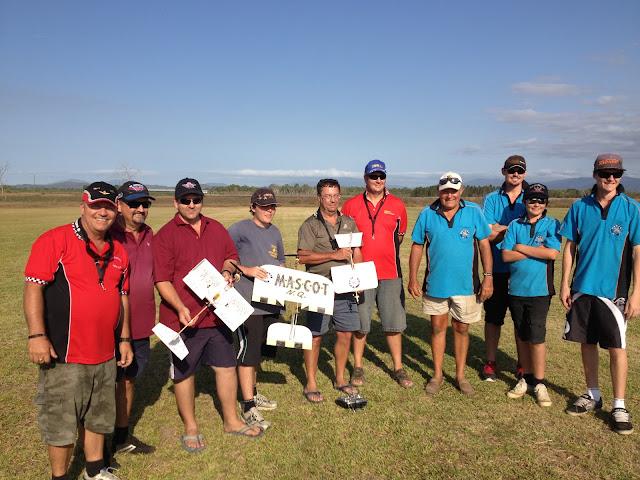 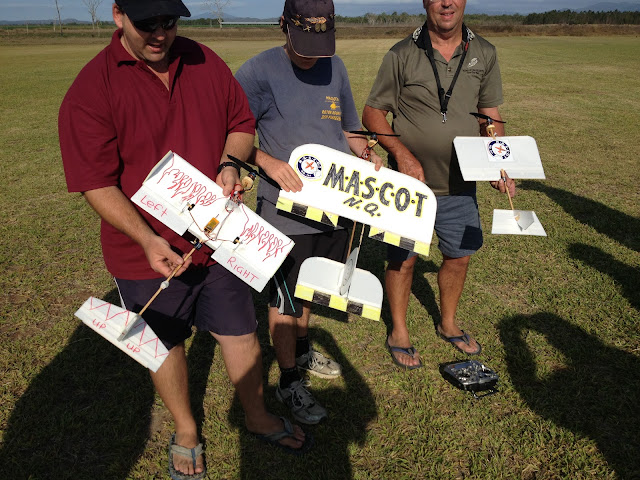 So, there was nothing left to do but get this party started - it was to be last man standing with the aircraft that stayed in the air the longest to be delared the champion.

The CMAC entry was piloted by our James & the MASCOTNQ entry by their young James - youth vs. experience!

The three craft were hand launched & it was obvious that the Townsville craft would not last long as it was almost uncontrollable & crashed shortly after takeoff.

The other two climbed quickly & sat into the wind - clearly the CMAC entry looked more stable & with those side force generators appeared to be on rails as it cut through the strong wind!

The height achieved was incredible! 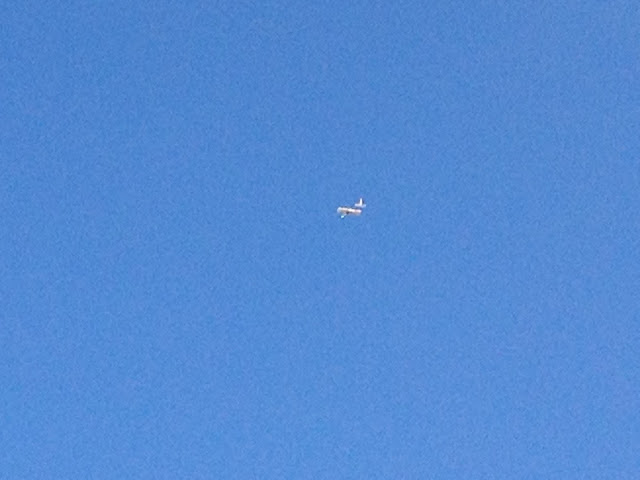 Here's the pilots locked in a battle of wills! 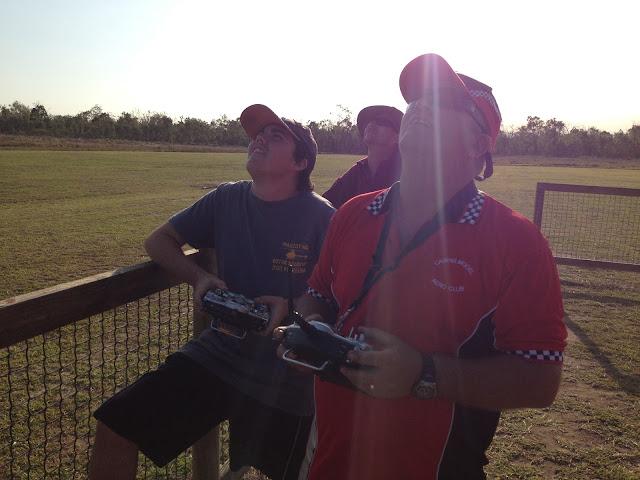 In the end young James had used too much power trying to stay into the wind with his inferior design & also performing aeros for the crowd: he started to lose throttle & then height, & then to the dismay of his MASCOTNQ team mates he sunk back to earth.......

With a few snap rolls & loops for the crowd, CMAC James brought the victorious craft in for a landing with thunderous applause from the impressed onlookers!

The plane had been in the air almost 25 minutes! 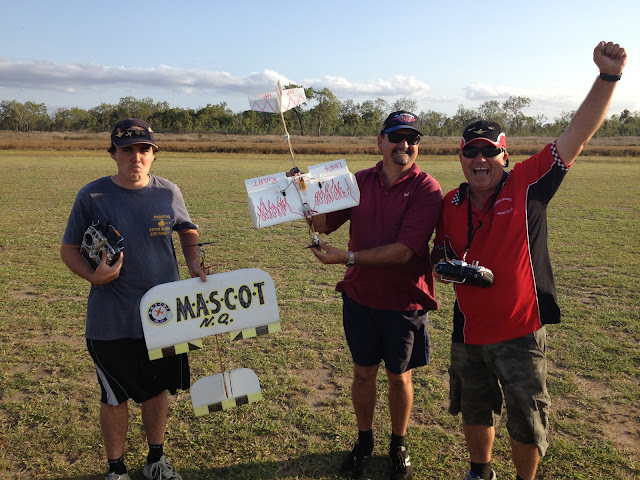 Townsville's entry was never recovered from the surrounding bush land but they still wanted to be in the photo! 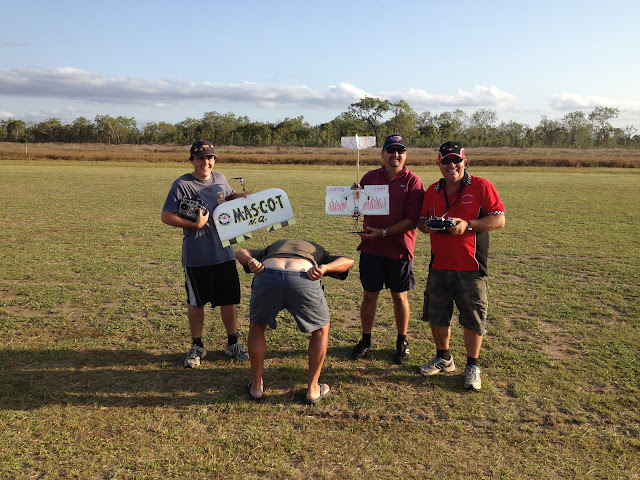 First there was the Nutta, but nobody counted on the Nutta F**ker!! 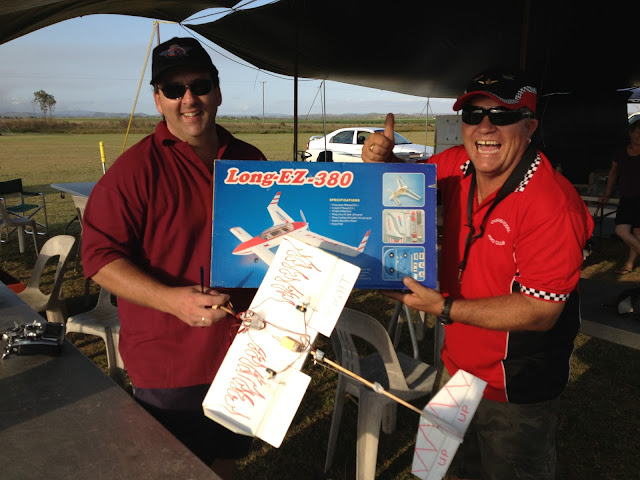 Well done to Mark & the crew from MASCOTNQ for putting on a great day & we look forward to doing it all again soon.

The "Nutta F**cker" will be on display next Saurday afternoon at our regular club day at the turf farm.