Some days are diamonds, some days are rock.........for me yesterday was the latter with 'rock bottom' summing things up (the same could be said for Dennis)....anyway, more details on that later.

As reported last week we have decided as a club to enforce new safety rules & Anthony put together some fantastic transportable safety barriers to separate the pitts from the start up area.

As you can see from these photos he did an amazing job & it took Paul & I no time to set them up, & many thanks to Graeme for pulling them down & storing them in the shed. 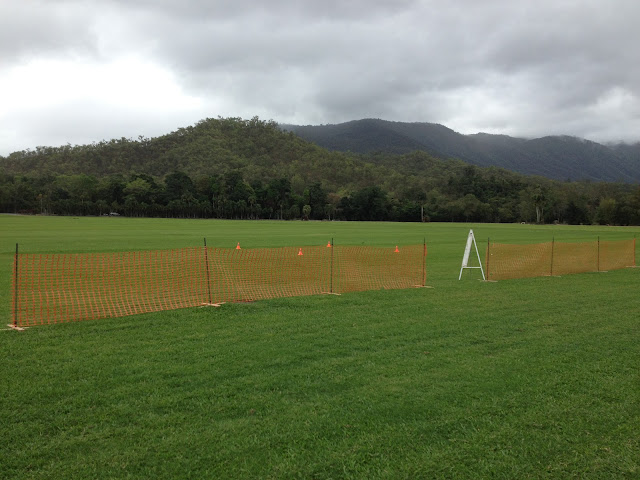 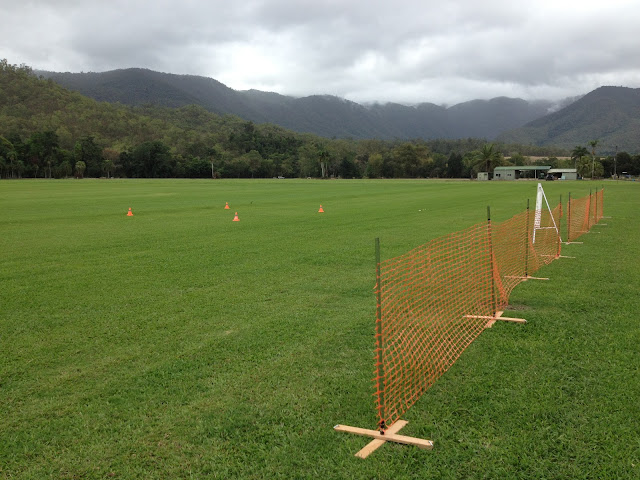 James has his new Edge well & truly sorted & she flew like a dream with no dead sticks; he also had the 'old girl' out which also flew perfectly.

Here's a couple of photos from previous weekends. 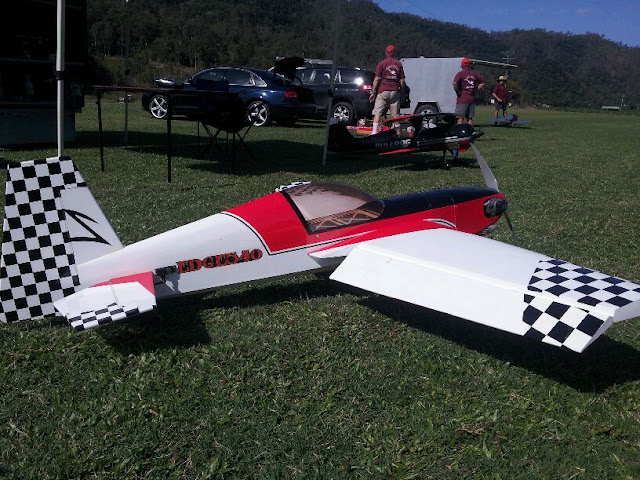 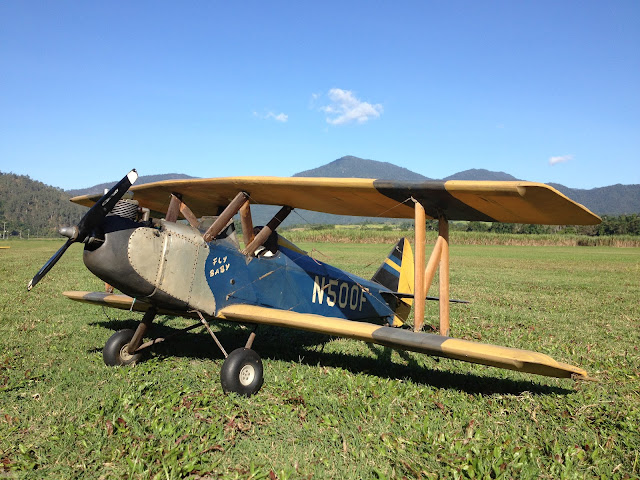 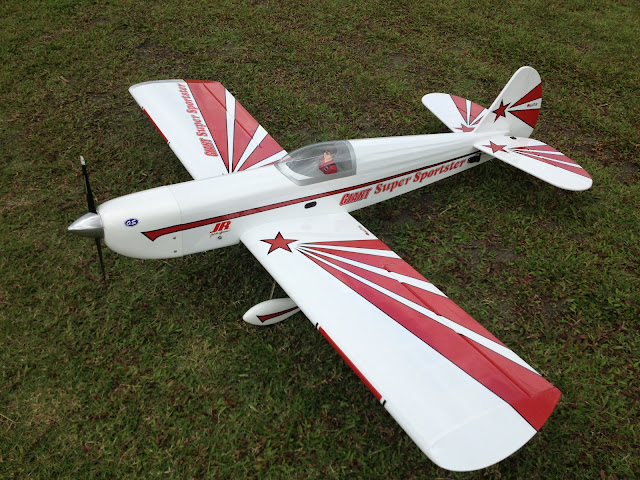 Curtis brought out his Super Skybolt & Graeme had one flight with his PC-9 before the exhaust fell off! 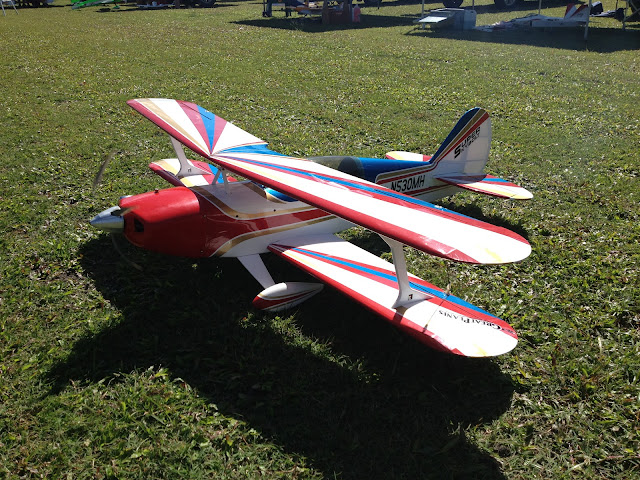 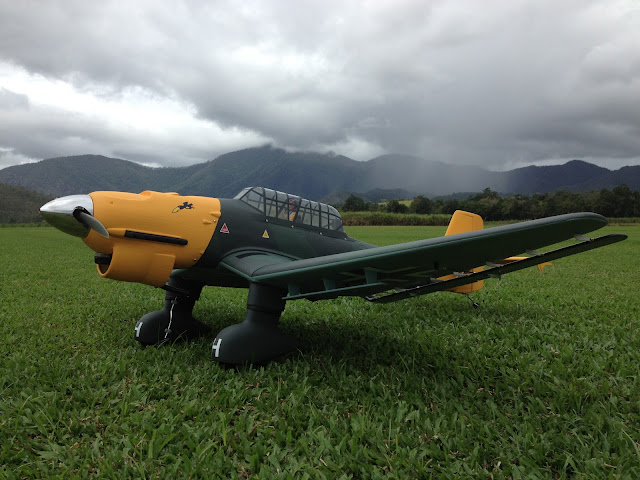 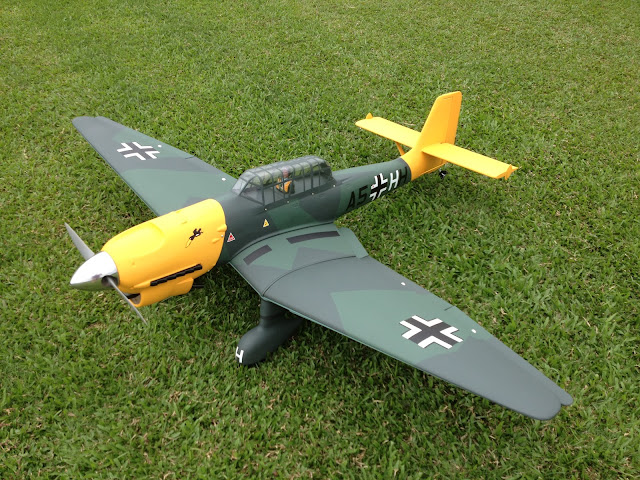 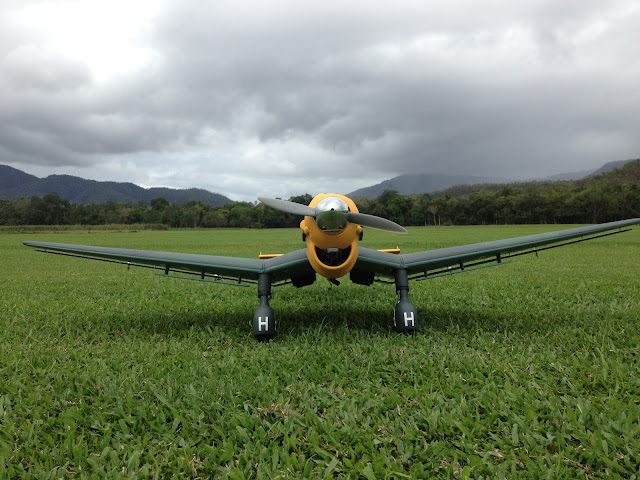 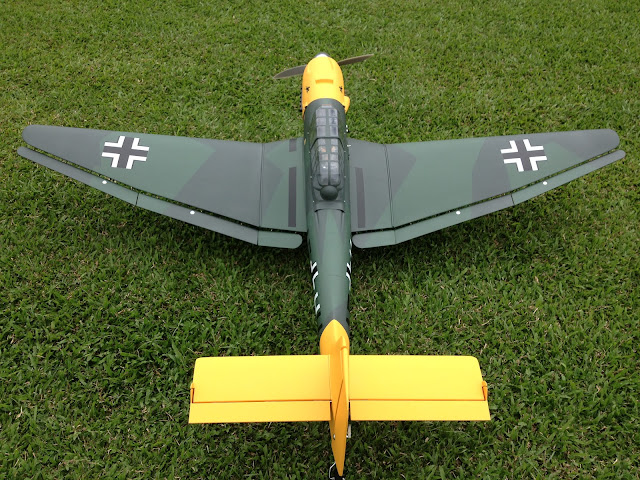 Here's some video so you can hear the YS FZ120 Supercharged Four Stroke!


And we all know that amazing fat body of the Gee Bee! 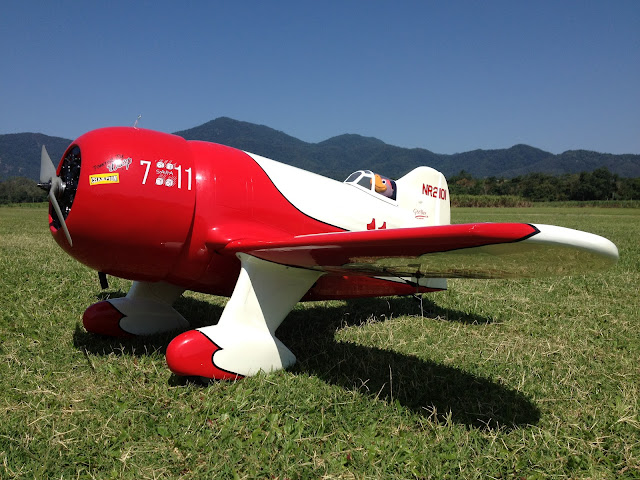 The Stuka was on its third flight after adding a little more nose weight & sorting out an exhaust issue...James had her trimmed out beautifully & was just about to hand over control to me when disaster struck!

The wing parted company with the fuselage & fluttered to the ground.....the fuselage proceeded to head towards the earth like a missile & was almost totally destroyed including the incredible YS supercharged FZ120 four stroke.....

The wooden leading edge dowels that secure the leading edge of the wing had sheared off under load which then allowed the wing to be ripped away....... 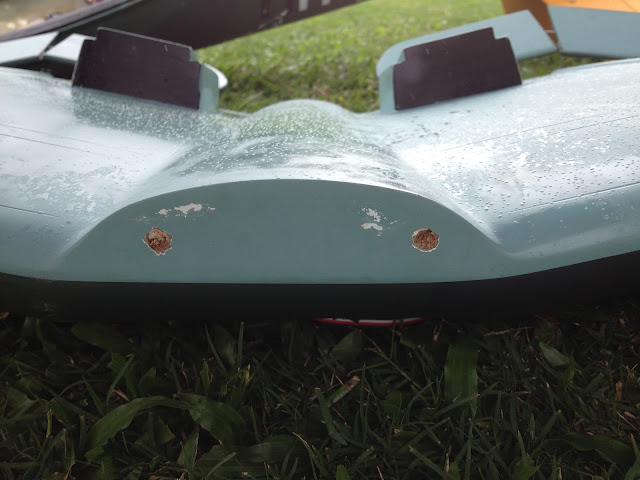 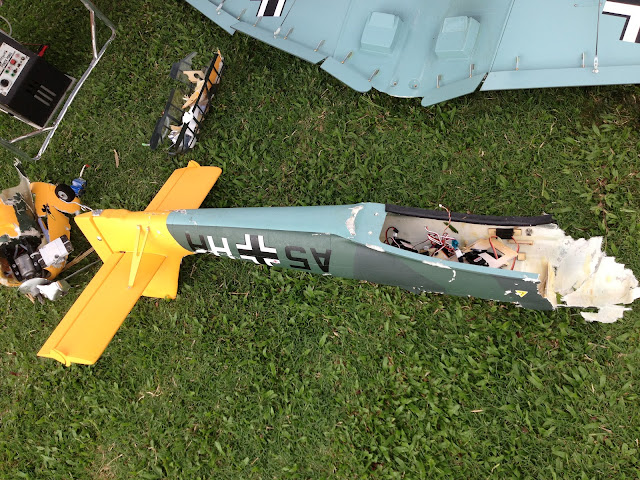 Look at the spinner! 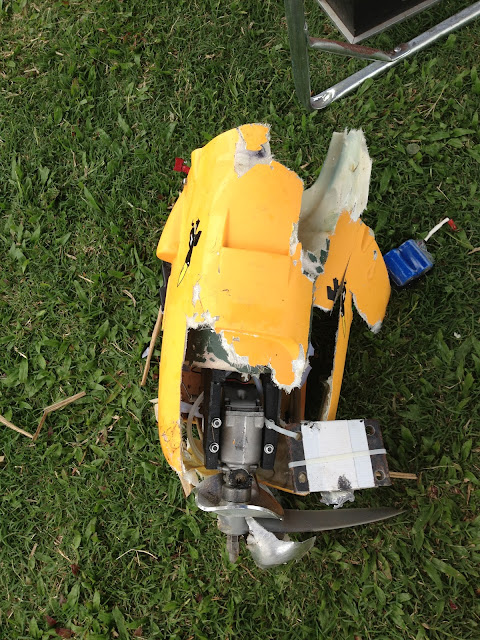 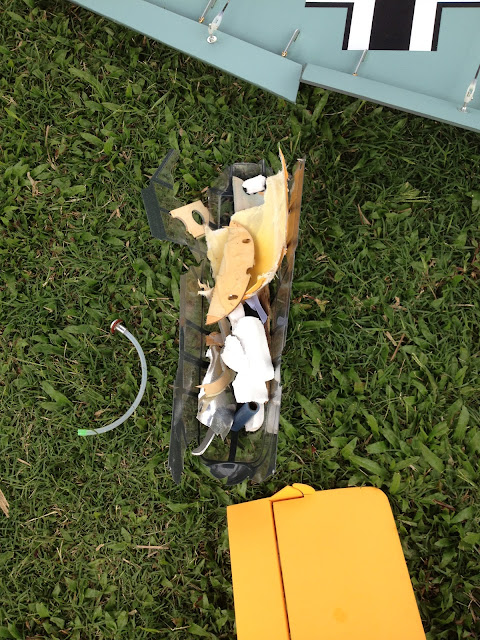 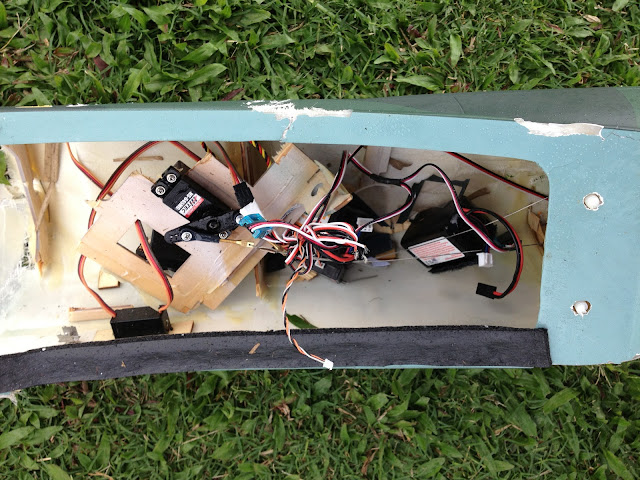 I'd like to say a HUGE thanks to Paul Dixon who spent many hours during last week helping me with the Stuka assembly as well as suspending any of his own flying activities yesterday to concentrate on final set-ups.....sorry it all ended so badly Paul!

Thanks also to James for being a willing test pilot & having to suffer the psychological scars of watching helplessly as the aircraft was annihilated!

Then, as if we hadn't had enough destruction for one day, Dennis' Gee Bee was also destroyed.....

After a nice take off & looking nice & stable in flight she went into a dive & could not be recovered - cause unknown.... 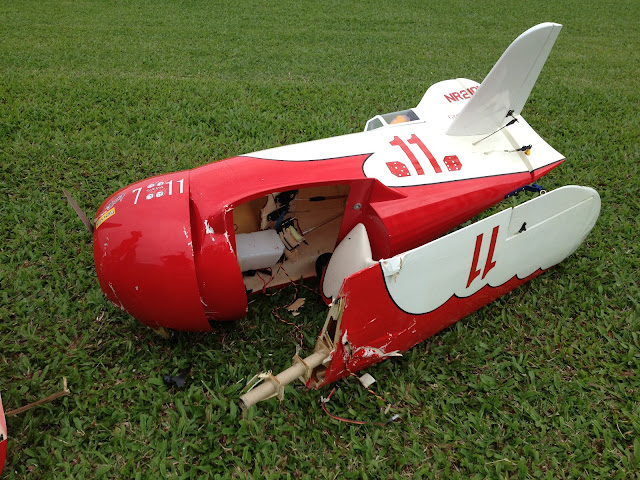 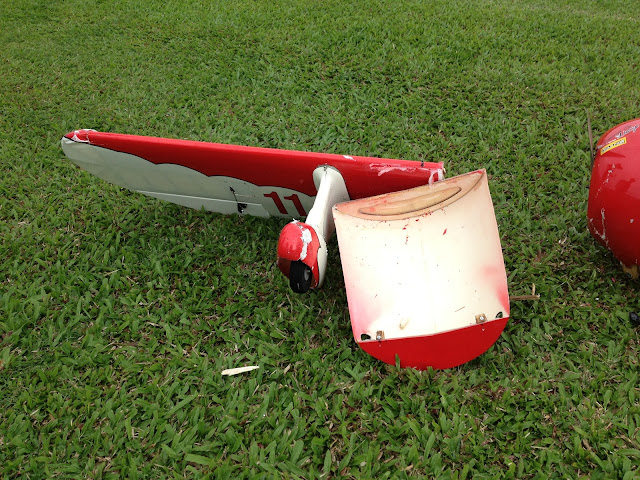 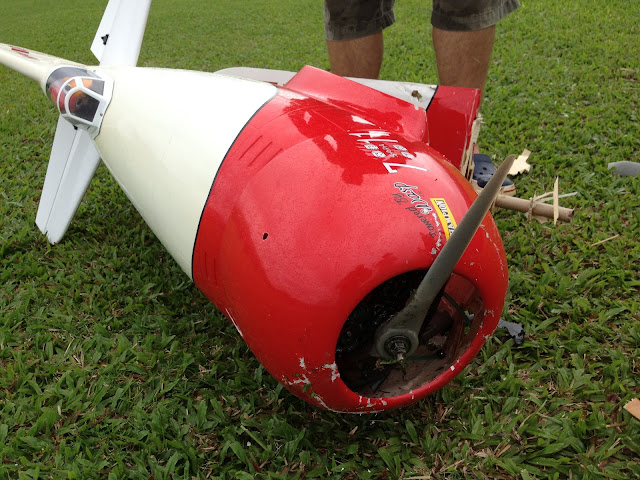 We all had a drink in honour of the fallen & rest assured that Stuka Mark II will make an appearance in the not too distant future. (With carbon or aluminium leading edge dowels)!

A couple of reminders - next weekend is the Mareeba Fun Fly so make sure you get up there at least for one day, and if you haven't done so already make sure you email Anthony in regards to his question about the shipping container for the club.

See you in Mareeba!